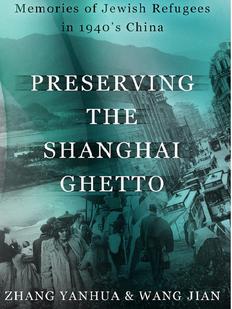 by Zhang Yanhua and Wang Jian

In the mid-1940s, as a result of European discrimi­nation against Jews, the Tilanqiao neighborhood of the Hongkew district in Shanghai had become a Noah’s ark.  Large numbers of elite Jewish people from Central European countries endowed it with cultural prestige.

Originally published in China as The Space, The Stories and Shanghai Jews in the Hongkew Ghetto, this richly illustrated collection of remembrances, and history of the neighborhood’s contemporary reconstruction, puts the Shanghai Jew­ish experience into multiple perspectives. Due to its historical and cultural position, and its distinctive architectural style, the Hongkew Ghetto has been listed as one of twelve historical and cultural areas in Shanghai—the smallest in geographical size yet holding an outsized historical legacy.

Foreword: Searching for the Essence of the Tilanqiao District

Throughout history, Shanghai was a city with a network of rivers, rivulets, lakes and ponds; thus, there were many bridges. These rivers have since been filled in and the bridges have ceased to exist, but their names have remained. In addition the bridges have become the names of certain districts. Often, historical events have been layered upon the experience of historical figures, creating a confluence of many stories and even making some world famous. Tilanqiao is a representative example.
If it weren’t for history’s special concern for the Tilanqiao district, perhaps people wouldn’t remember this tiny bridge. It would be just like the hundreds of other bridges that once stood in Shanghai — merely one more bridge that disappeared. The accumulated wisdom of history and culture made Tilanqiao’s name become eternal.  In the minds of some Shanghainese, Tilanqiao’s fame is due to what was once the largest prison with the best facilities in the Far East. In certain contexts, Tilanqiao became synonymous with the word “prison.” At the end of the 1920s, Jews built the Ohel Moshe Synagogue. Later, again because of the chaos of war and anti-Semitism in Europe, a large number of fleeing Jews entered Shanghai, making it a Noah’s Ark for Jewish refugees where many elite figures assembled. They gave Shanghai’s shops, residences, schools, gardens, streets, and theaters unique cultural value. They added several different colors to Shanghai’s contemporary culture. Thus, Tilanqiao has a deeper and broader cultural meaning.
Because of the accumulation of history and culture, the style of the city and its architecture, and this district’s international connotation, Tilanqiao district has been classified as one of Shanghai’s twelve historical and cultural districts. Even though it is Shanghai’s smallest historical and cultural district, its meaning and value can’t be encompassed in its twenty-nine hectares (seventy-one acres).
The authors of this book once participated in the Tilanqiao Historical and Cultural District’s preservation plan, have intensively researched Shanghai and its architectural heritage, and have also published many treatises and theses on this subject. This book is on the cusp of being a treatise on the past and present of Tilanqiao, searching for the district’s people, stories, and space. It looks toward the future, using a new point of view to research this district, which has drawn the interest of many Chinese and foreign scholars. Therefore, I would like to congratulate the authors on their new contribution.

Zheng Shiling
Academician at the Chinese Academy of Sciences, expert on the preservation of historical architecture