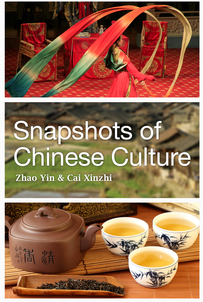 by Zhao Yin and Cai Xinzhi

Over their long and colorful history, the Chinese people have produced a variety of fascinating and useful cultural artifacts and performance inventions—from the compass and paper money to tea ceremonies and wedding parties—that have won the admiration of people around the world. They have improved living conditions for many who remain unaware of the Chinese origins of these innovations. This book's forty concise chapters serve as windows into a wide range of Chinese cultural traditions and practices. Some aspects of culture featured here include Chinese gardens, homes, and temples; calligraphy, chess, and clothing; paper cutting, seals, and musical instruments; martial arts and Peking Opera; and feng shui (auspicious design). Amply illustrated, with idiomatic phrases parsed throughout, the authors offer a road map to guide both the novice and "old hand" alike through the essential elements of Chinese culture.

Zhao Yin is professor of English Language at Foshan University in Guangdong province, China. She has written and edited ten books and published numerous papers. In recent years, she has committed herself to the dissemination of Chinese culture and translation work.

Cai Xinzhi is an associate professor at Foshan University devoted to the dissemination of Chinese culture. In recent years she has published many papers, participated in the compilation of several books, and directed projects on behalf of Foshan University.

As the world globalizes, China is playing an increasingly important role in world commerce and trade, political and peacekeeping efforts, and more. Now that China has re-opened its doors to the world, many Chinese people study and work abroad, while people from all over the world visit China. Many foreign entrepreneurs not only actively develop their business in China, but also show great interest in learning about its long history and rich culture. With cross-cultural communication ever increasing, the whole world is facing the great challenges and changes that are intrinsic to cultural differences. Differences in customs, ways of thinking, and social background often result in conflict and can be barriers to communication. In our English teaching careers, we have encountered many excellent native Chinese English
learners who have passed the College English Test level 6, and even the Test for English Majors Band 8 (the highest levels), but cannot introduce Chinese customs, philosophy, and arts to foreigners. Thus, we believe we have a great responsibility to promote Chinese culture and allow China to be better understood by the world.

The purpose of this book is to introduce genuine Chinese culture to English speakers, as well as to provide English-language materials to those who are devoted to promoting Chinese culture. It will also serve as a platform for Chinese who cannot spare the time to systematically study their own culture and customs. In addition, it can be used English learners to improve their English as reading material or a text book, or by students of Chinese language who seek to understand culture through language.