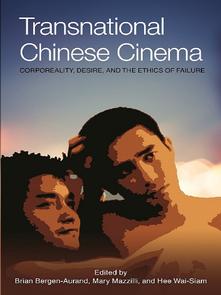 Corporeality, Desire, and the Ethics of Failure

This collection of original essays on transnational Chinese cinema examines the corporal, psychological, and affective aspects of experiencing bodies on screen. In effect this book contributes to the intersection of two growing scholarly fields: modern China studies and cinema studies. It is however the growing interdisciplinary study of how bodies get represented, interpreted, and queried that gives this volume its unique and timely focus. Taking Chinese cinematic moments as its exemplary objects, this book engages fruitfully with the material and discursive elements of embodiment. And it interrogates the dynamics between the mind and body involved in bio-cultural practices of cinematic production, distribution, exhibition, and reception.

Brian Bergen-Aurand is Assistant Professor of English and Film in the Master of Arts in Contemporary China Program at Nanyang Technological University, where he specializes in film, ethics, and embodiment. He is the author of the forthcoming book, Blind Cinema.

Mary Mazzilli is a Lecturer in Theatre at Goldsmiths College, and Research Associate in Chinese Film and Theatre at SOAS, University of London. She has published several comparative studies of Contemporary Chinese Theatre.

Hee Wai-Siam is Assistant Professor of Chinese at Nanyang Technological University. He writes on Chinese culture and film and is completing a history of Sinophone Cinemas in Singapore and Malaya.

Hongfei Liao, The Amsterdam School for Cultural Analysis, University of Amsterdam, The Netherlands

"Overall, Transnational Chinese Cinema touches the edge of previously unexplored grounds, providing new perspectives on the ways films can be read. By incorporating the sensibilities of scholars adept in film theory, embodiment studies, philosophy and cultural studies, the collection engages insightfully with Chinese cinema, charting the way we encounter transnational Chinese cinema and how we in turn interact with it."

The essays in this collection focus on transnational Chinese cinema, corporeality, desire, and the ethics of failure. They explore the corporal, psychological, and affective aspects of encountering bodies on screen and engage with the material and discursive elements of embodied moving image experiences to highlight the mind-body dynamics involved in bio-cultural practices of cinematic production, distribution, exhibition, and reception. In approaching these films and videos through embodiment studies, this volume complicates and develops the scope of existing approaches to Chinese cinema, including national, transnational, Chinese  language, and Sinophone models. The writers in this collection draw from a variety of methodologies—including textual and reception analysis, cultural studies, queer theory and feminism, phenomenology, ethics, trauma and diaspora studies, affect studies, questions of film authorship and film stars, genre studies, and debates over censorship—as they contend with incarnate and disincarnate aspects of cinematic and post-cinematic encounters. Engaging with the bio-cultural regimens involved in the different aspects of experiencing Chinese and other bodies entangled in diverse moving image situations allows the authors to explore the relation between the cinematic, the carnal, and the social in regard to cognition, sensation, and emotion, leading to discussions of the ethics of cinema, specifically the ethics of failure. Throughout this collection failing becomes a strategic or practical exercise with the potential to transgress and transmogrify. The final focus of these analyses is on failure, not as opposed to success, but as critical practice stemming from and developing further discussions of ruins and ruination, inutility, touching and drifting, desire and disgust, disillusionment, voicelessness, sacrifice, wounds and scars, arousal, disposability, and hunger. Here, the cinema provokes us to see the possibility of failure.

In addition to these students, the editors would like to thank the many people who made this project possible, especially Anne, Leake, and Tsegu.